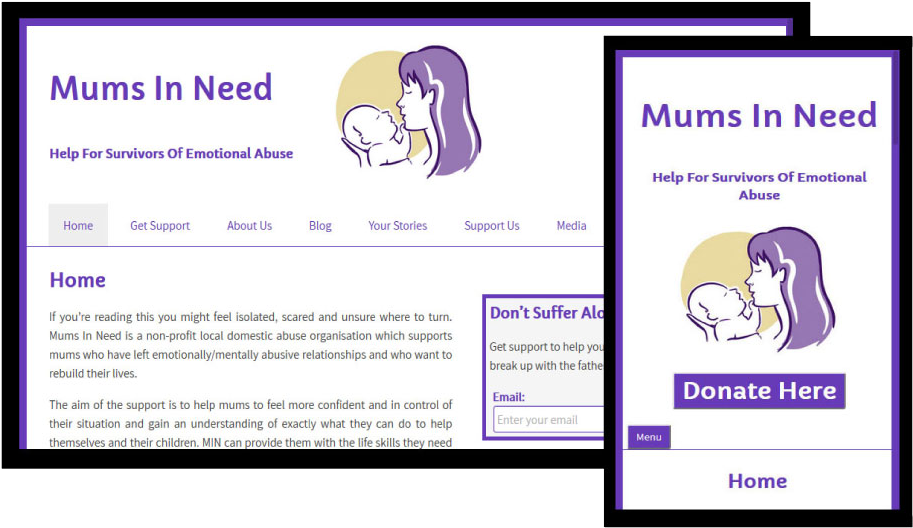 I originally started working with Mums In Need in April 2017 after finding they needed to update their website and didn’t have the time to do it themselves. Though this became a bit of a mix up as they were wanting a Wordpress site but at the time I wasn’t versed in Wordpress or PHP.

We went our separate ways but I really wanted to help them and their charity so I decided to learn Wordpress and PHP to be able to work with Mums in Need. This turned out to be a great decision as it’s not just helped them get a better website but it also helped me increase my skills and knowledge.

Mums In Need is a charity based in Sheffield that helps people suffering from emotional and financial abuse. Their website was originally a free Wordpress theme which whilst useful wasn’t very appealing due to the restraints of what it could do. In our initial discussions about the design and layout, I was to create a cleaner more responsive site that utilised the space.

The charity’s colour was changed to a deeper purple so to stand out better and I helped to re-design the logo. This included the new font, colour and changing the positioning whilst keeping the original image. New widgets were added to include their email subscription, survey link plus personalised social media icons. The overall look kept the familiar feel of the old site but made it cleaner and easier to use.